Let’s get one thing out of the way real quick. If you haven’t read Giga #1 yet then you need to go do that. This isn’t a horrible place to start but it’s a lot better to start at the beginning. Besides, it’s just one issue and they just had a second printing come out so you should be able to find it pretty easily. 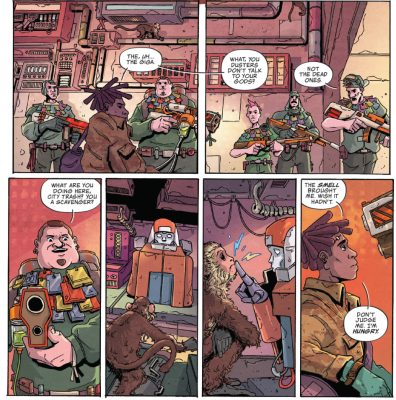 Anyway, we pick up here with Evan having been captured by some dusters. Much as I’d expect from Evan here, he is being a bit of an asshole and doesn’t give up much information. Including the fact that he has an illegal artificial intelligence with him.

Alex once again does a wonderful job setting an overall serious tone to the story while still allowing moments of comic relief where it makes sense. This is a great continuation of the story from #1 and if you enjoyed that one you’re in for more of the same here. Complete with a few new characters that bring out the richness of the world that Alex has created.

What I really want to talk about more with this issue is the art and lettering though. Because they’re just fantastic and I really don’t feel like I gave them the credit they deserved in my review of #1.

The emphasis that Aditya puts in certain words and phrases really lets the attitudes of the characters shine through. There’s no question when someone is saying something in a flat tone and when they’re really turning up the asshole meter. This is an issue with lots of talking being used to carry the story and those kinds of things matter here a lot.

I really want to bring up how great the art is here, but only because it’s really great. I feel like the art is glossed over a lot in comic reviews. I’m not really sure why, maybe it’s because people feel like they don’t really have the words to describe what they’re seeing. I’m going to try anyway.

The art here is I think perfect for the story. The robots have a life to them that I think really suggests that they’re more there than just robots. There’s characters in the background doing things to enhance your understanding of the world. The characters just ooze with personality in ways that I know I’d never be able to pull off. But part of that is because my art skills are basically nonexistent.

Really, just look at the panels I’ve put in here with Evan goes through the city trying to get away. Not only do you have Evan actually moving between the panels to help show how fast he’s going, you also have the arrows on the wall to help guide your eye and make sure you’re seeing things in the order that the artist intended.

There are so many reasons why you need to be reading Giga. It’s just a great comic in basically every way and #2 here proves that this is a concept that really has places to go.