The World of Darkness was, for many a 90s kid, the ‘cool’ alternative to Dungeons and Dragons. Cool being a very relative term, of course, but this system that emphasized moral ambiguity and gothic horror was incredibly appealing to many. The venerable World of Darkness has taken many forms in the years since, but it feels like it’s back in its most classic incarnation in Vault’s World of Darkness: Crimson Thaw #1.

So, let’s get the obvious out of the way – if you’re not already familiar with the World of Darkness, this issue is going to be tough to follow. It’s not that it’s poorly written – in fact, the massive crew of big-name writers do a thoroughly amazing job introducing characters and concepts – but rather that this is a dense book. There’s a glossary of terms in the back of the book that’s an absolute must for those who have never dipped their toes into this world before, but even that’s going to feel like too little, too late for some.

For those who are already familiar with the world, though, the story simply works. There are quite a few moving parts in play, from the political machinations of the Vampire characters to the territorial squabbles between supernaturals. Most of this is handled with a deft hand, but it’s very clear that there’s still a ton of room left for exploration.

For the most part, the story is well-served by the art. Ohta’s art really fluctuates between solid, workmanlike draftsmanship in some scenes and some truly great horror work in others. It’s hard to pin down exactly what makes  this style work, but there’s something about it that makes everything feel like it could have been launched alongside the Original World of Darkness without looking out of place.

The colors are largely good, though the darks do get a little muddy from time to time. With that said, the palette does help the tone of the story and it’s hard to see how many better choices could be made. Addison Duke is clearly the right choice for this type of comic.

So, what’s the verdict? If you were ever a World of Darkness player, you will get at least a nostalgic thrill out of this book. If not, you’ll find yourself appreciating a solid adventure story that might not always make sense. 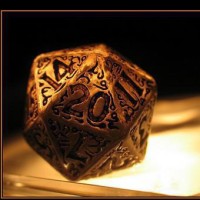